Back in 1993, Apple thought they could get a part of the billion dollar photography industry by releasing their own digital camera. Digital cameras at the time were in early development and did not have the same quality as our current cameras. Here is my Quicktake with a neck strap and a red floppy for comparison: The QuickTake looks nothing like our digital cameras today. In fact, I think it looks more like a pair of binoculars than a digital camera. It is based off of the Casio DC40, which looks very similar. 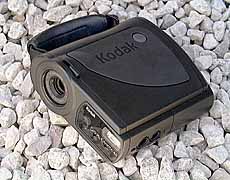 Feature wise, it has a built in flash, 50mm lens equivalent 1mb of EPROM, and two quality modes, low and high. Low quality produces up to 32 320x240 images, while High quality will produce up to 8 640x480 images. Because the storage space is an EPROM, the images must be all erased to reclaim space, in contrast to todays camera where images can be erased after they are taken. It also uses 3 rechargeable AA batteries or a PowerBook 1xx Power Adaptor. The literature on Apple's Website states that the camera cannot use standard 1.5v alkaline batteries. The QuickTake does not produce JPEG images. Its native format is a PICT file, with a now defunct compression algorithm. After downloading the pictures, I use QuickTime's Picture viewer to convert them to JPEGs Quality wise, the pictures that come out are not any better than your standard cameraphone, with the exception that you have a flash. The Actual images look somewhat washed out and low contrast. But that could be because today's cameras over-saturate and sharpen the images they produce to make it appear higher quality. The QuickTake software is slick. The QuickTake Control Panel lets you connect your Macintosh to the camera, and mount it as an external disk on your desktop. There you can drag and drop picture files to your hard disk or open them from the camera. The QuickTake program loads the images in an iPhoto fashion giving you bigger thumbnails and the option to rotate or crop the pictures. Despite the low quality, I hope to take some beautiful pictures with the camera. You can check out what I have already done by looking at my album:
QuickTake Photo Collection 1

I've had constant freezing when I try to connect my QuickTake 100 to my WallStreet. Will your QT100 connect to a WallStreet? Which Mac are you using to connect? I'm not sure if it's the camera or the computer causing it freeze. When it freezes, the only way to unfreeze it is to press FN-Shift-Control and the power button to force it to turn off. It freezes immediately when I try to connect to the camera in the control panel or when I try any of the options using the QT1 software. The computer seems to work otherwise, although it waits almost a minute after the start up chime to actually begin booting.